Although the syndicate folded after three years it had given ‘Hoppers the chance to consolidate and be in a position to contemplate the next move. In 1932 another syndicate arrived with a proposal for Greyhound Racing.

Their offer of £2000 (a vast sum at the time) to buy out the remaining three years of the lease could not be refused. So, once again the club was homeless but this time it had money in the bank.

In 1934, 10.6 aces of agricultural land was acquired at Lea close to Greaves Town Lane, behind The Plough Inn on Blackpool Road, for a sum of £1400 with a further £600 expended in levelling a pitch. A clubhouse cost £1400 and on September 28th 1935 the first fixture was played, Furness doing the honours. Sadly, much work and expense was required over the following years in solving the drainage problems of the site.

The introduction of rugby football into the four local grammar schools was encouraged and led to a steady stream of talent arriving at the club as a result. The fixture versus Hoylake was played at Kirkham Grammar School in 1924 as an exhibition game, only soccer being played there at the time. Season 1936/7 saw Old Huttonians merge with Grasshoppers, bringing with them many names whom would spring to prominence as the years progressed.

The Second World War caused the suspension of many regular fixtures, but the club kept going by offering club games to individual servicemen and arranging fixtures against Service Units in the area. The fixtures against Fylde, Waterloo, Blackburn, Wigan Old Boys, Broughton Park and Furness managed to survive also. As the area was widely used as camps by the various services, many famous players donned the blue and white jersey, Humpish of Hampshire, Kenneth Fyfe who captained Scotland against England and Gray a Scottish International forward, being examples.

During the war years it was customary for Inter Service Internationals to be played. Keith Dryden who’s father Norman, of Thomas Dryden Electrical Manufacturers, was England’s reserve outside half versus New Zealand Services at Twickenham: 24 November 1945. The pavilion at Lea was commandeered by the Special Constabulary Force and also used as an Air Raid Wardens Post.

A newspaper article from an early date in the hostilities, noted that almost the entire Preston Grasshoppers Rugby Football Club recently joined in a body, The Duke of Lancaster’s Own Yeomanry. Upon the cessation of hostilities, a total of twenty members had lost their lives in the conflict.

The immediate post-war years saw the club, field a very successful side, but once again drainage problems were requiring considerable effort and expenditure. For a while during this era an annual fixture took place on New Years Day or Boxing Day between the Public Schoolboys of Preston and Fylde, alternating between Ashton and Ansdell.

The introduction of rugby football to secondary modern schools brought another source of talent and soon the first Colts side was fielded. ‘Hoppers can take particular pride in this area of the game as a succession of dedicated committee men and coaches have ensured that the record of our Colts side will stand comparison with any in the country. The harvest, which the club has reaped in young men who have moved on to first team football, has been enormous.

In 1961 another team began to use our facilities when the Lancashire Constabulary began to field sides. More later of the benefits that liaison was to produce.

Our first hosting of a county fixture since the Cumberland game at Ribbleside and earlier final trials in 1929 & 1938, occurred in the 1964/5 season. The improving fixture list meant that the better players were able to demonstrate the level of their skills leading to a number of County Championship appearances. 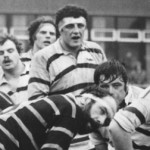